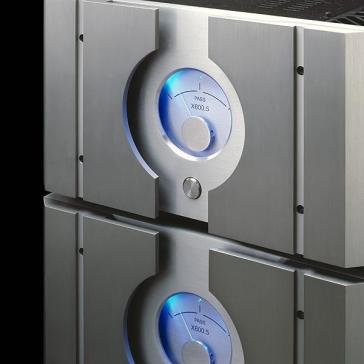 X600.8 600 Watt Class AB Mono
We’re excited! Because we’re celebrating our 23rd year by presenting the best amplifiers we’ve ever made. Our New Point 8 Series, X.8 & XA.8, operate “higher” into Class A than ever before and bridge the gap between measured performance and subjective experience.

Designed for audiophiles by even more demanding audiophiles, they invite listeners into the music as never before. Even more, they represent a summation of our expertise in designing amplifiers, while elegantly expressing our philosophy of more amplifier, more progress and more music.

Seven years in the making, the Point 8 Series demonstrates our belief that the best products must be carefully adjusted until their components operate in harmony — then subjectively fine-tuned. Not satisfied with measurements alone, we put the amplifiers’ state-of-the-art engineering through an extensive, rigorous listening process using six different sound systems to deliver peak musical experiences.

As a result, the amplifiers glow with innovation. For example, the output stages of the larger Point 8 amplifiers bias more deeply into the Class-A operating region. Their larger push-pull Class-A operating envelopes deliver low distortion and additional loudspeaker control at ordinary listening levels. And higher power MOSFETs, many more than usual, increase the amplifiers’ Class-A operation while running at fractions of their stated specs to enhance both performance and reliability.

Still not content, we uniquely molded each model’s front end to the specifics of its output stage so that the nine amplifiers’ front ends vary in size, voltage, bias current, dissipation, and single-ended vs. push-pull bias distribution. The directly coupled front ends, which house the input and voltage gain stages, maximize each model‘s output stage performance, while imparting to each model its own subtle and unique sonic signature.

There’s more — including larger power supplies, more storage capacitance, more precise reference voltages, and new, larger heat sinks — but suffice it to say that with the Point 8 Series, we move beyond cookie-cutter circuits.